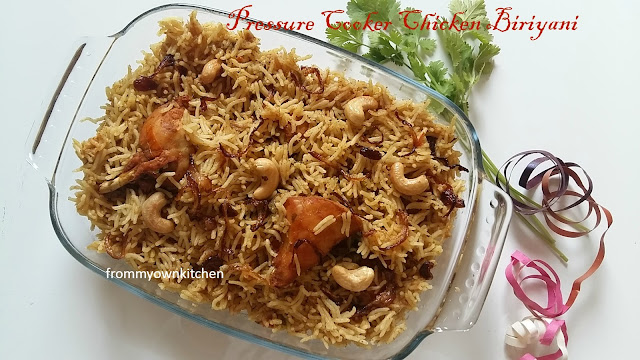 Today is 10th of February and time for this month's 'Muslim Food Blogger Challenge.'I have already mentioned in my earlier post that I am part of a face book group with so many ladies of the same interest in food.And this month's Challenge theme was to cook any type of Biriyani.
I was really excited at the theme,that is,to get to see so many different biriyanis on the same day that too Friday which is mostly a Biriyani day for most of us hehe...but was wondering how to take a photo of the same on  that day.Because on Fridays,after quickly putting the biriyani on Dum, it is a rush to reach the masjid for Jumuah (Congregation prayer).Though it is not obligatory for women,it is acceptable.
Mentioning about Friday and Jumuah,there's a chapter(Surah) in the Holy Quran named as 'Surah Al-Jumua' and here's a reminder from the Holy Quran :
“O you who believe! When the call to prayer is proclaimed on Friday hasten earnestly to the remembrance of Allah,and leave aside business. That is best for you if you but knew.” (Quran 62:9)
Also there are many Hadiths describing its importance...One among them is.. 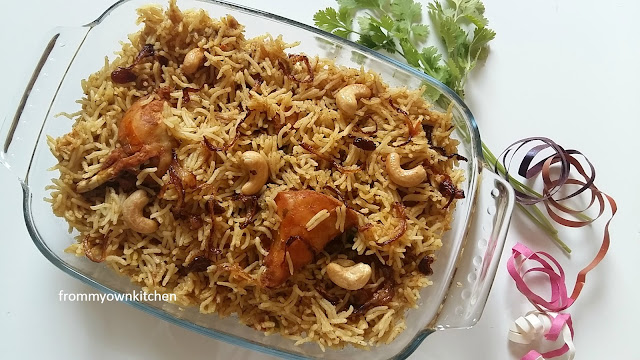 Now on to the recipe:
Ingredients
To marinate
Chicken  500 gms
Kashmiri chilly powder 1 tsp
Pepper powder  1/4 tsp
Turmeric powder  1/4 tsp
Garam masala  1/4 tsp
Yogurt 2 tsp
Ginger garlic paste 1/4 tsp
Salt    to taste
Mix the ingredients and marinate the chicken for at least half an hour(more time marinated the better)
Other ingredients
Basmati rice  2 cups
Onion  3 sliced
Tomato 1 large chopped
Ginger crushed  1 spoon
Garlic  crushed  2 spoon
Green chilly    6 nos crushed
Turmeric powder 1/4 tsp
Pepper powder    1/4 tsp
Coriander powder 1 tsp
Garam masala    1/4 tsp
Lime juice(squeezed)   2 tsp
Yogurt    1/4 cup
Cardamom 3
Cinnamon  1'' small piece
Cloves    4
Coriander leaves chopped   a fistful
Mint leaves  a few
Water   3 cups
Cashew nuts and Raisins  a fistful (optional)
Oil  3 tbsp
Ghee  1 tsp
Method
-Wash and soak the rice for half an hour and then drain it and keep aside.
-Heat a pressure cooker and add oil.Now take a fistful of sliced onion and fry.(This is for the garnish part and just optional )Keep the flame on medium.When the onion turns slightly golden brown add in the Cashew nuts and raisins,when the raisins pop up take out everything on a tissue paper.Keep this aside.
-Now in the same oil add ghee then add in the cinnamon,cardamom and the cloves.Add the remaining sliced onion and saute well.In between add the crushed ginger,garlic and the green chillies.
-When the onion turns translucent add in chopped tomato.When the tomato turns mushy add all the powders and saute well.
-Add in the marinated chicken and mix well.Now add the beaten yogurt and mix well for 2 minutes.The chicken will be well coated with the gravy of masala and yogurt.
-Now pour the water and let it boil.Add salt and check.
-When the water boils add the drained rice,lime juice and the chopped leaves.Give a mix.
-Now put on the weight and wait for 1 whistle.After 1 whistle switch off the flame and allow the pressure to go by itself.
-After the steam has completely gone,open the lid and gently fluff the rice.After 5 minutes take out the rice into a serving bowl.Garnish with fried onions,Cashew nuts and raisins. 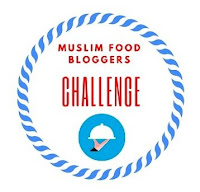 An InLinkz Link-up
Posted by Ruxana Gafoor at 5:02 PM

Friends...
Thank you for your visit and thanks a ton for your lovely comments....
So always keep in touch with your valuable comments and suggestions....
It means a lot to me...