Today's post is a simple fresh juice.Pineapple is one of our favorite fruit.Apart from its peeling part...Wow what a nice fruit..hehe :)...Fruit juice is a must on our Iftar table.Each day a different fruit is juiced sometimes its a shake or smoothie. 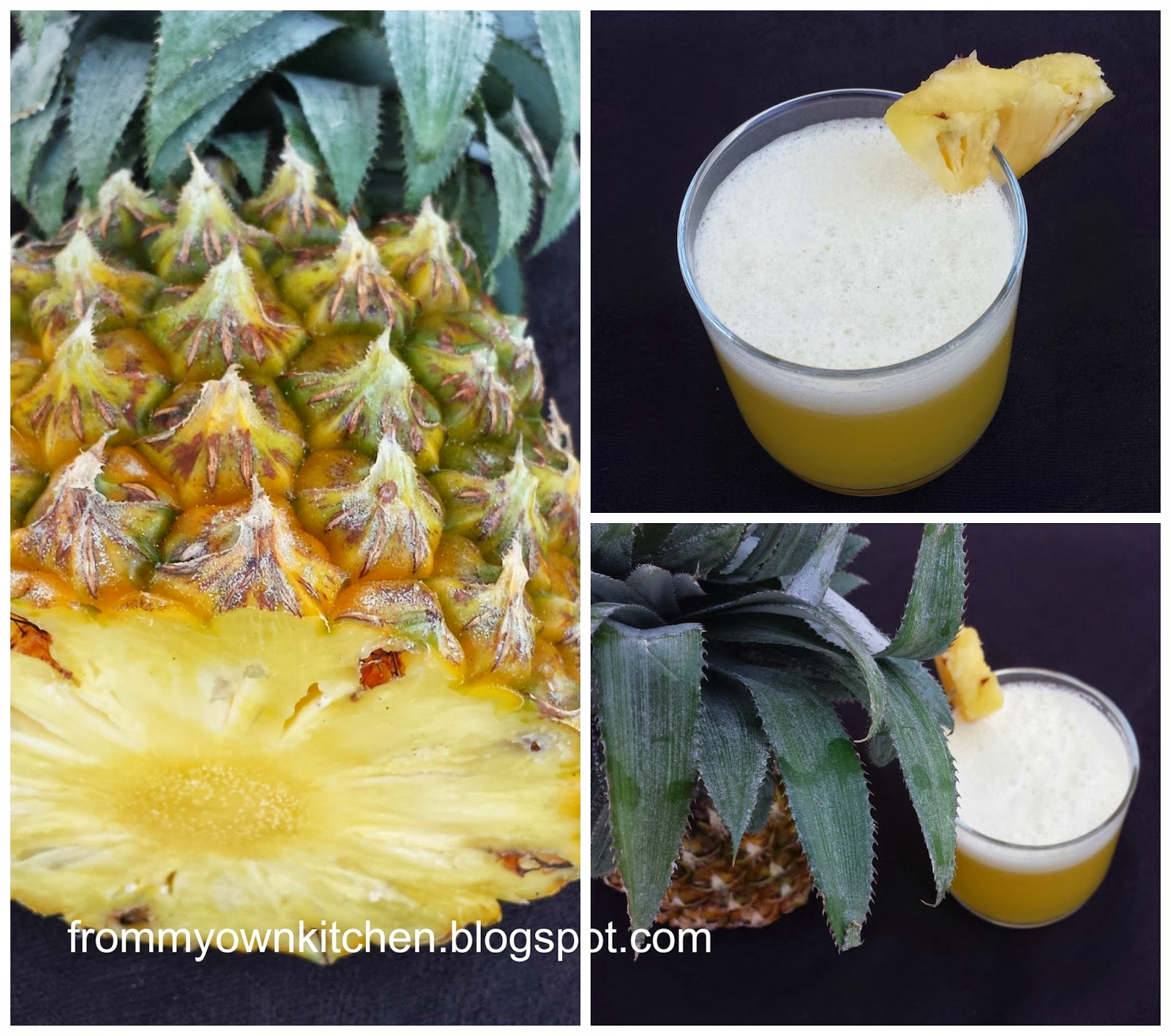 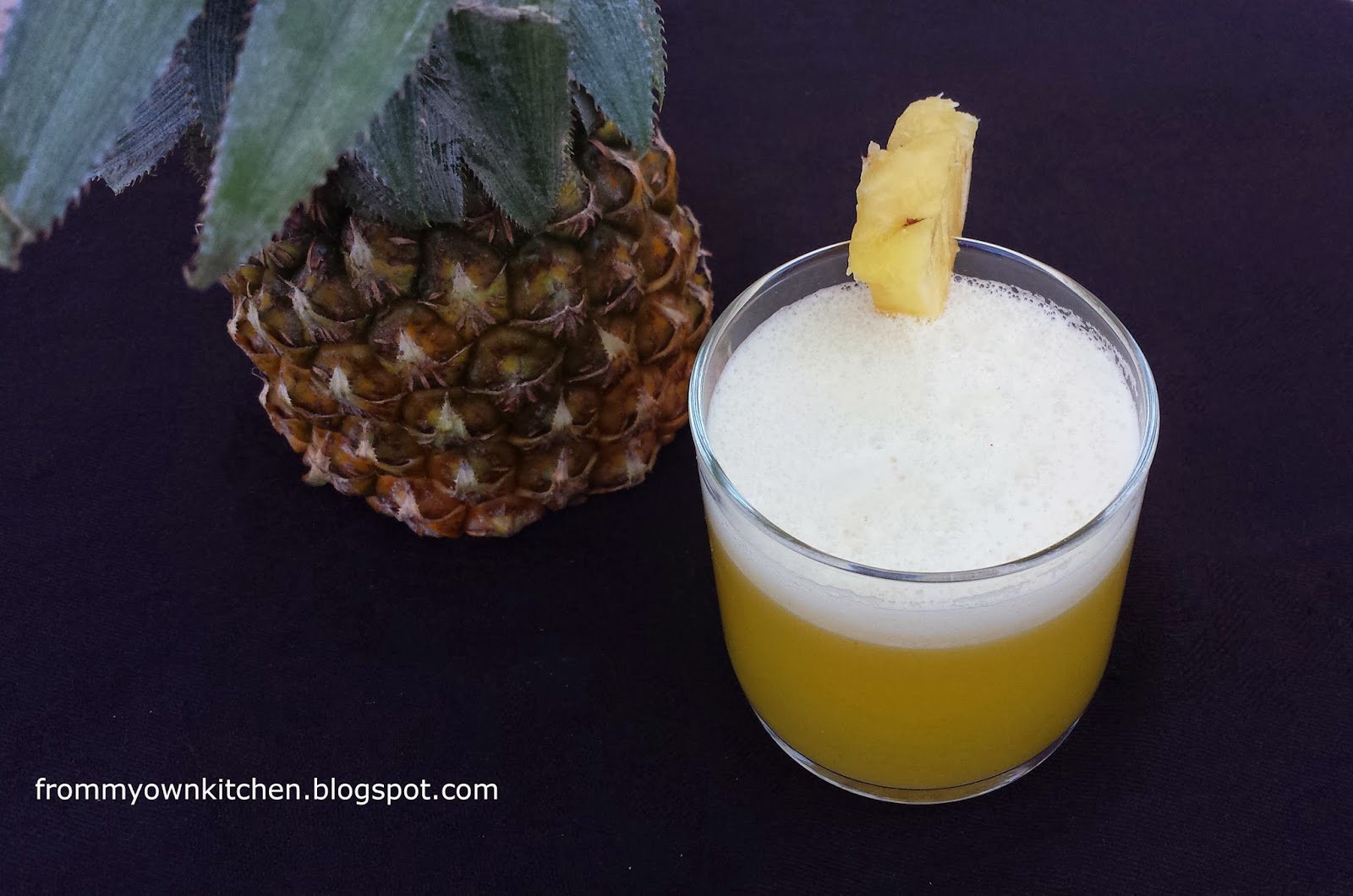 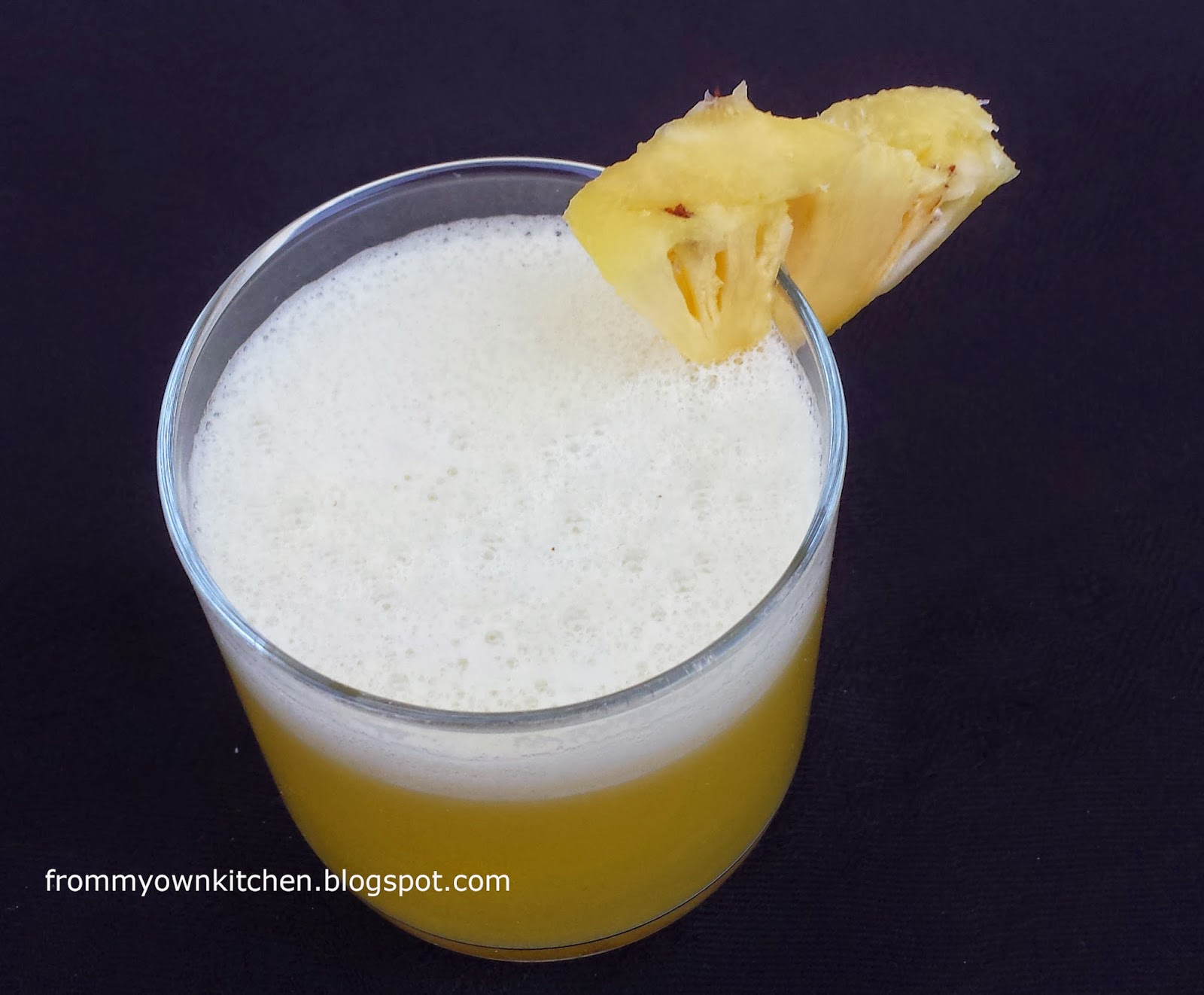 Method
-Add all the ingredients in a blender and blend well.
-Strain and serve. 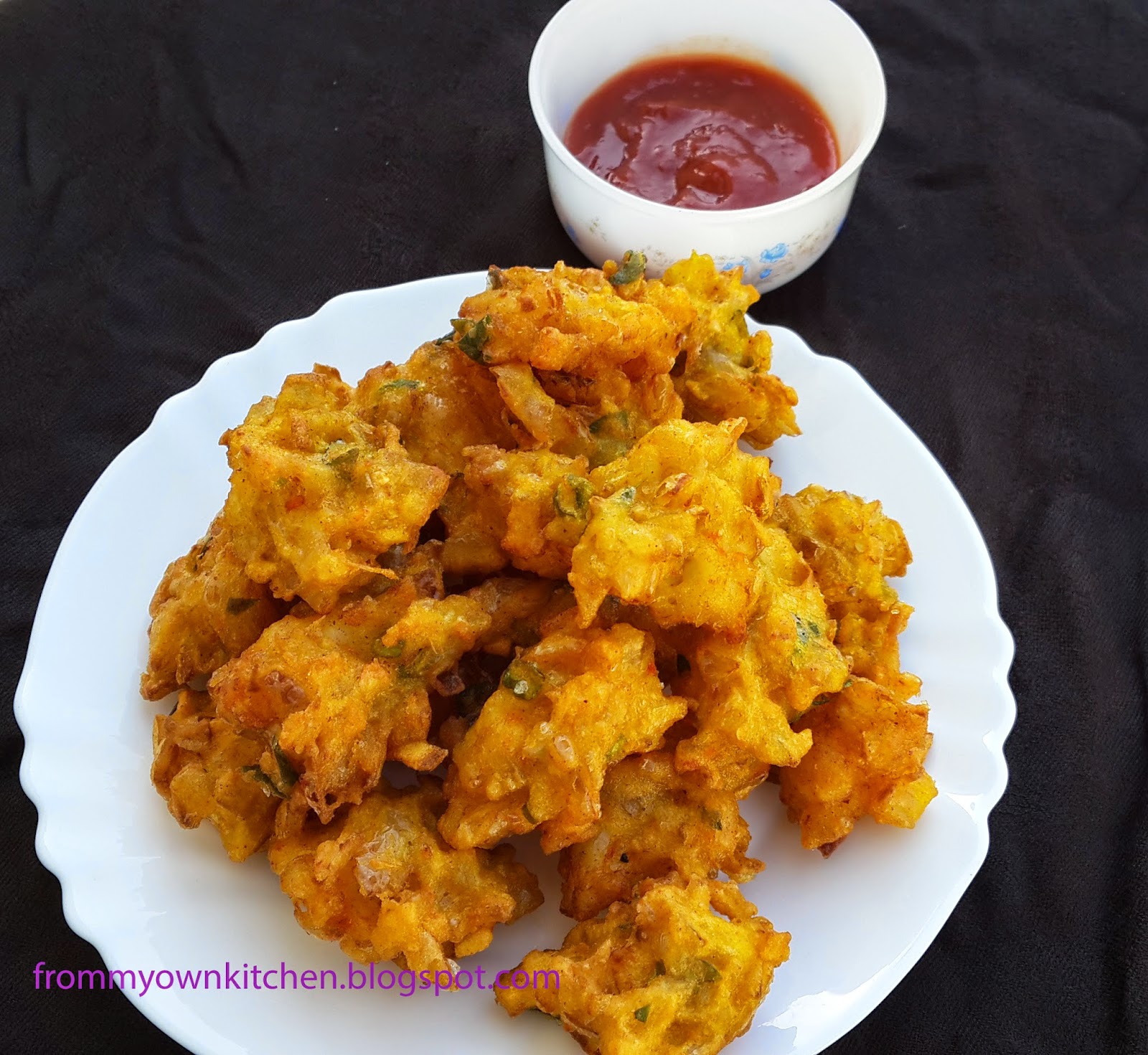 As I have mentioned earlier in my posts that one of my family's  favorite sea food is prawns.We like the addition of prawns in any recipes like snacks,fillings or curries.This is one such yummy snack which we all love. 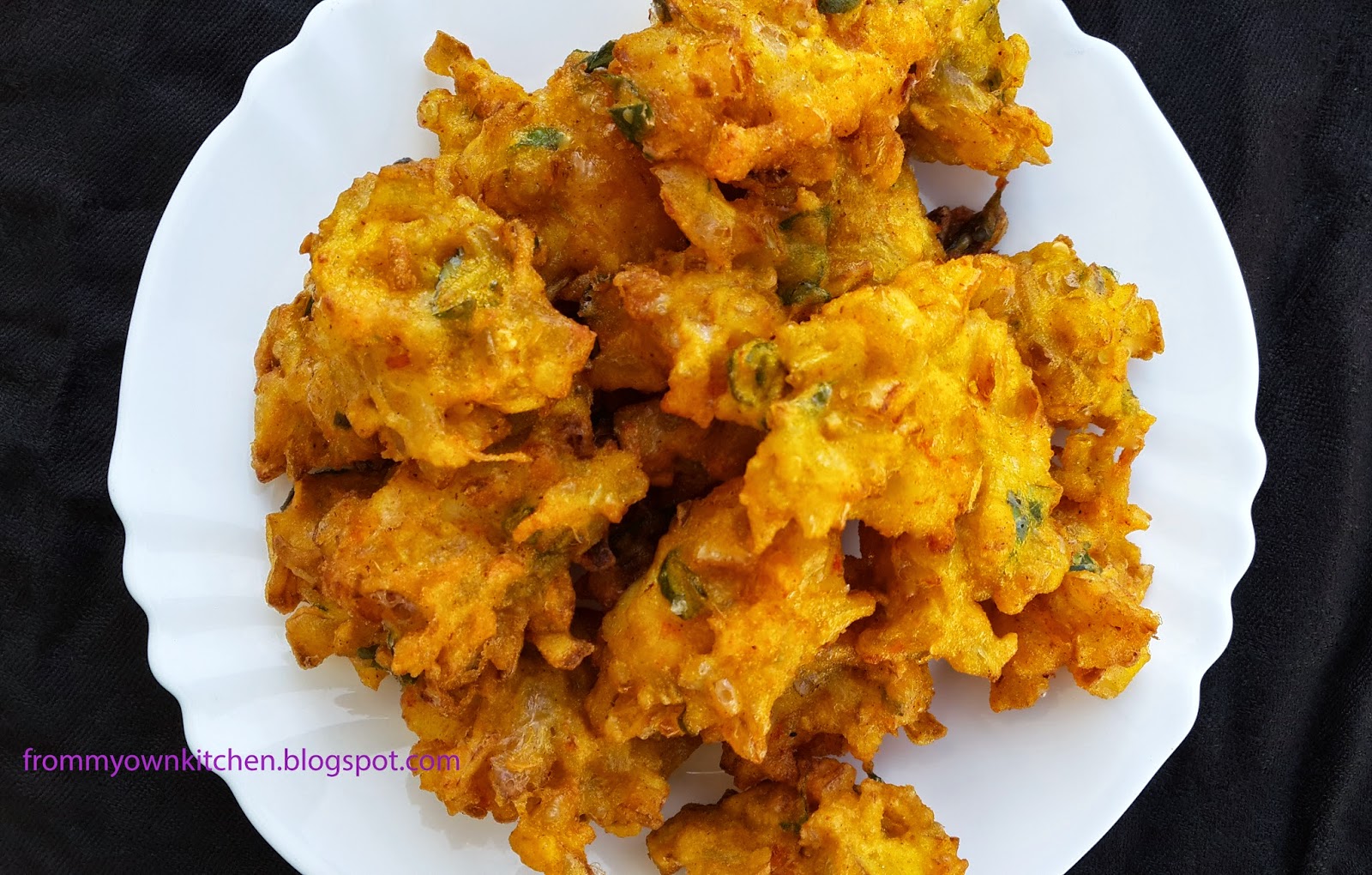 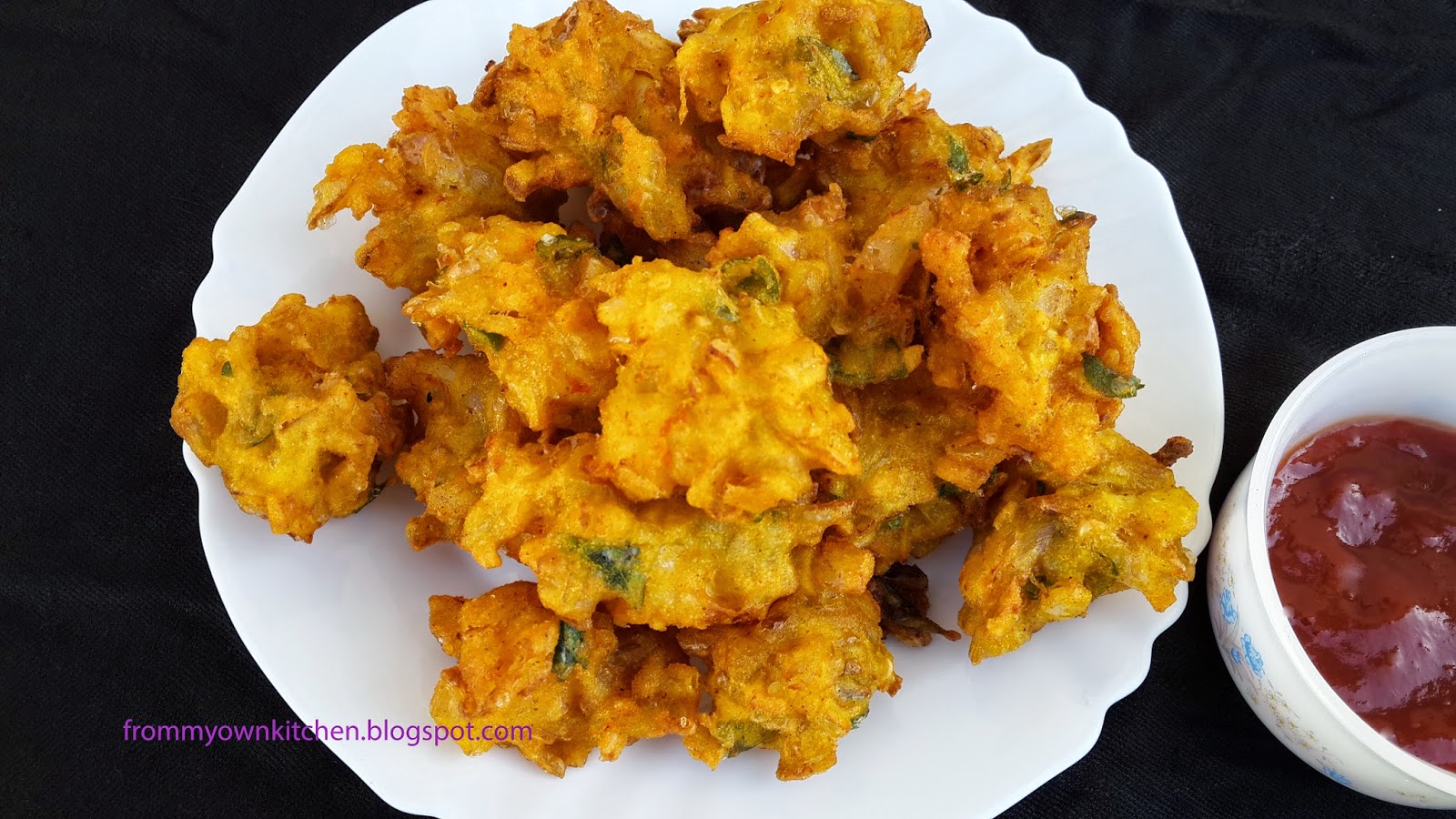 Method
-Clean and wash the prawns well.Cut each into 2-3 pieces(according to the size of the prawns).
-In a bowl add all the ingredients except the prawns and oil.Mix well and make a thick batter.Add water if its dry.(see image below)
-Check the salt and then add the prawn pieces and mix again. 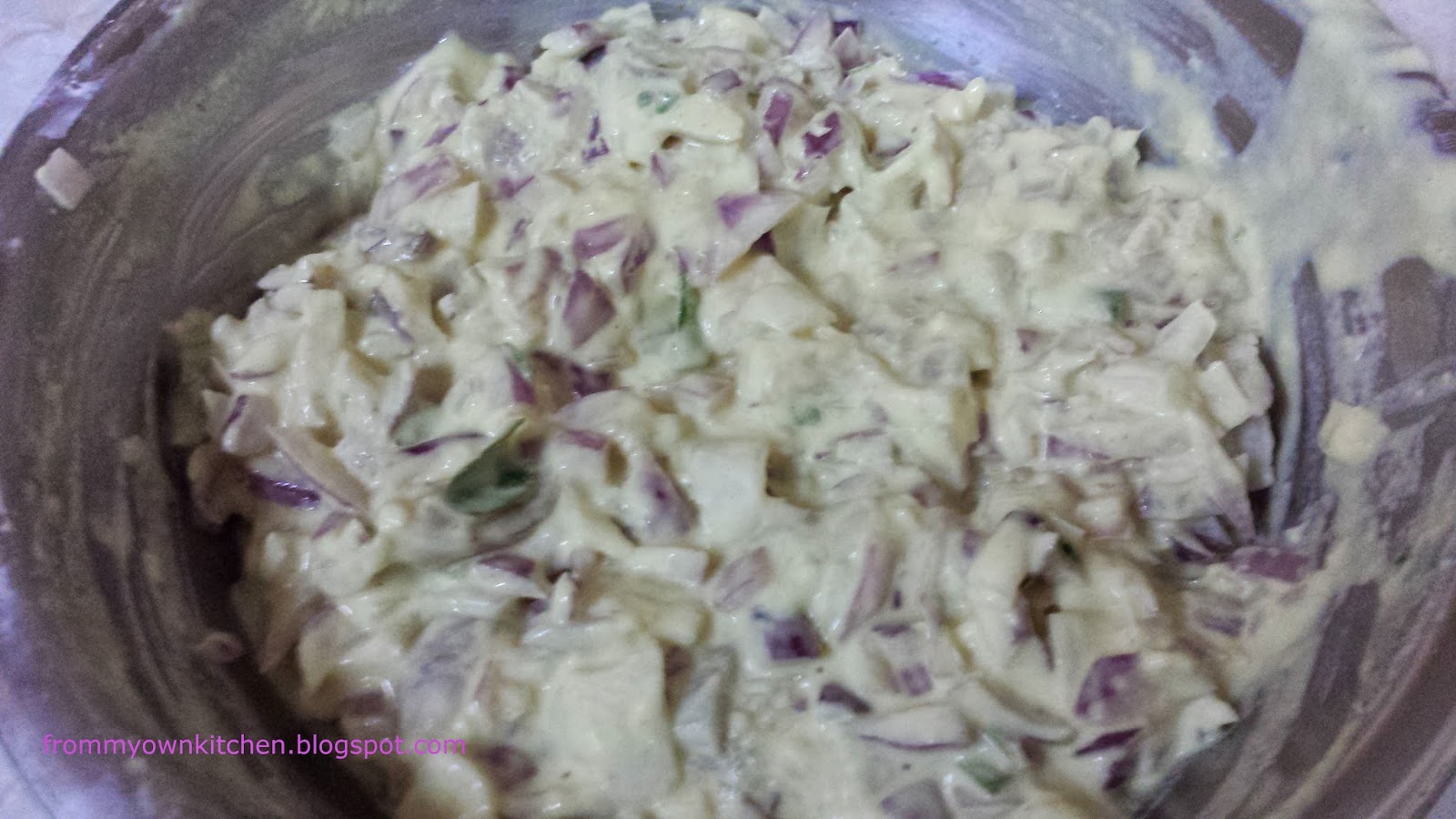 -Now heat oil in a kadayi/wok .
-When the oil turns hot slowly drop this mixture little by little using your fingers.
-Cook till both sides turn golden brown.
-You can serve these with tomato ketchup or any sauce you prefer and of course with a cup of hot tea. 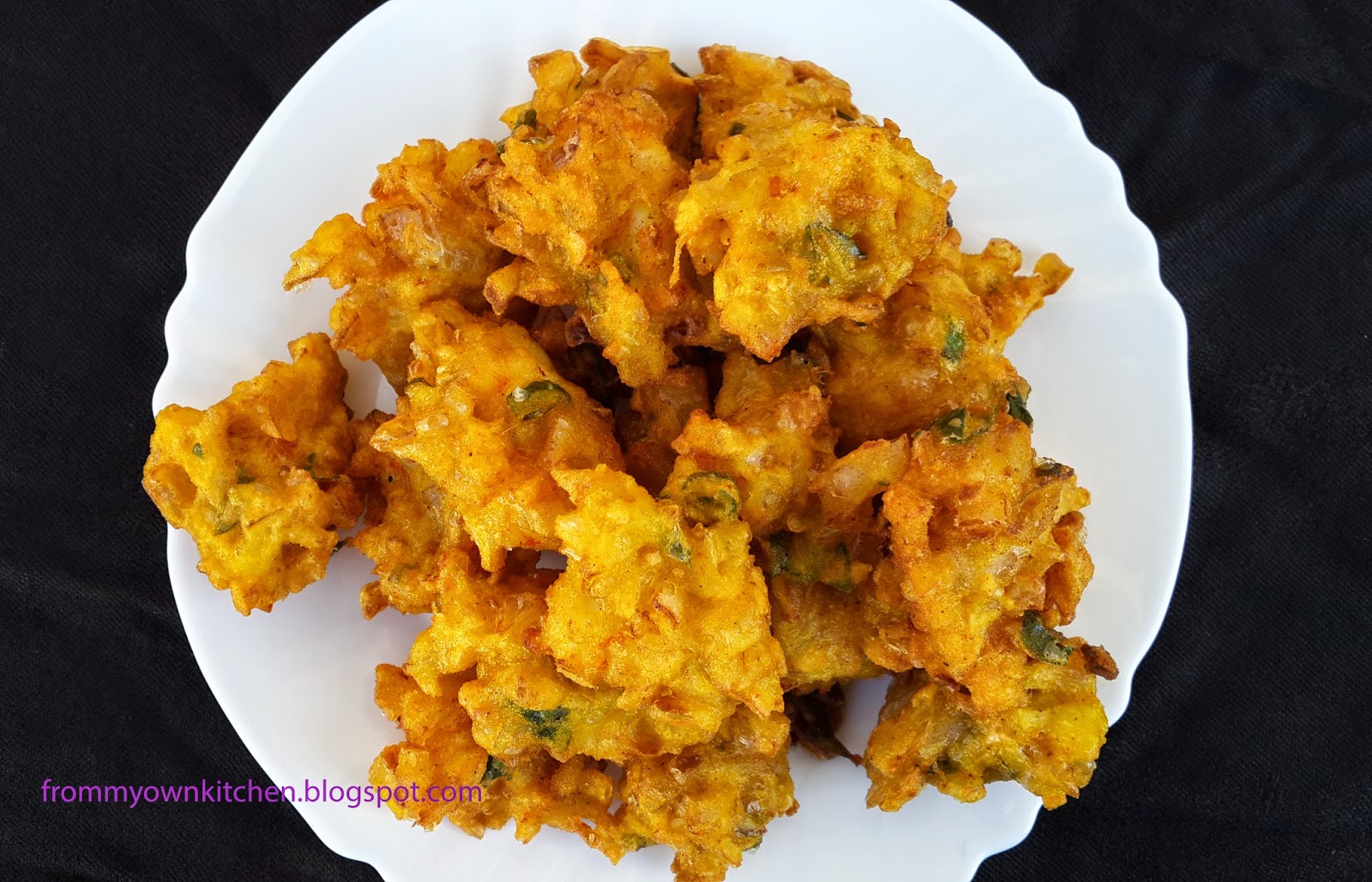 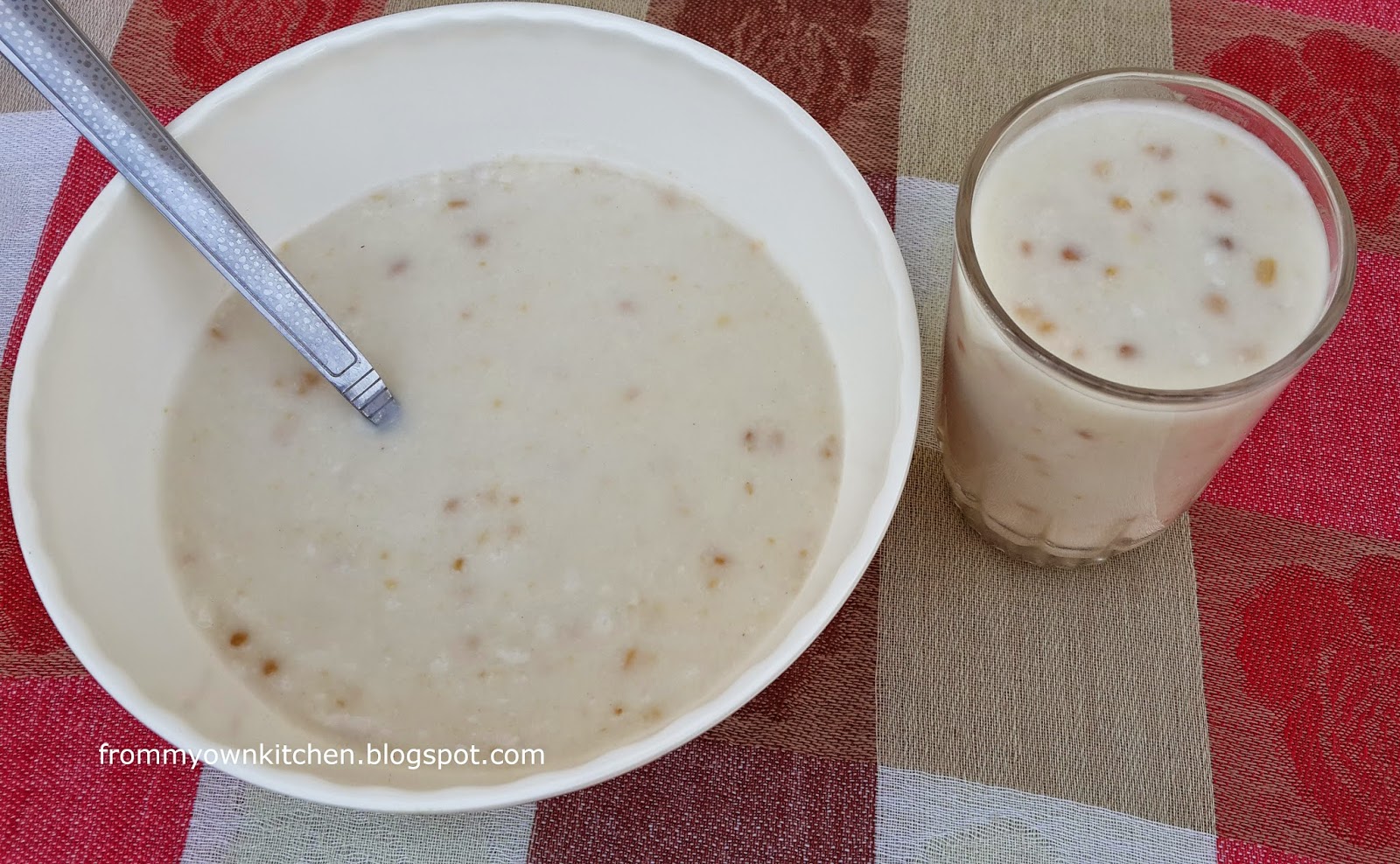 First of all Ramadan kareem to all my blog readers and friends.Can't imagine we have stepped into the middle of this blessed month.In Sha Allah within 2 weeks we would be greeting each other Eid Mubarak. 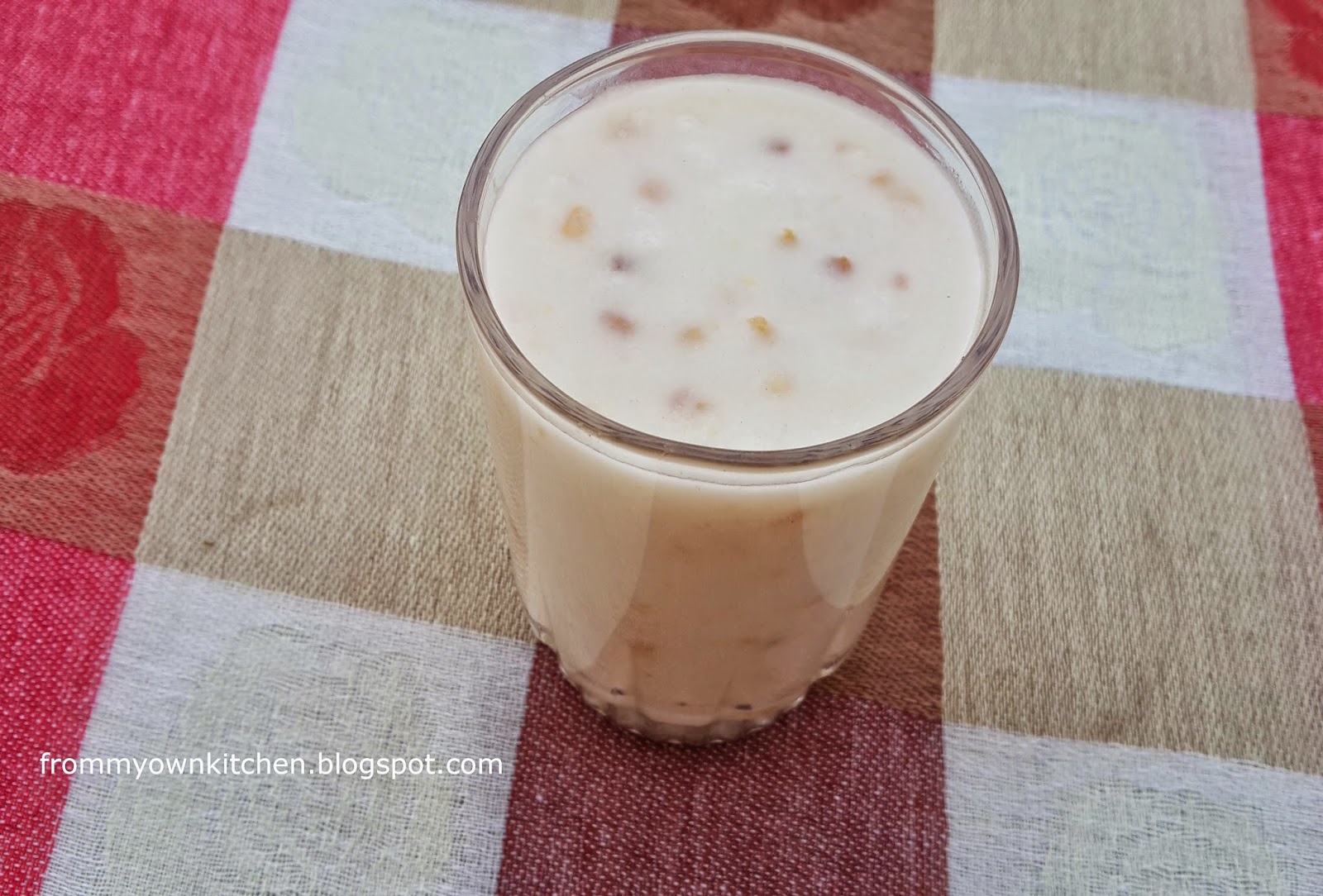 Ramadan is the ninth month of the Islamic calender (Lunar calender) on which Muslims all over the world observe fasting from dawn till sunset (from the starting of Fajr prayer till the magrib prayer).Fasting is one of the five pillars of the Islam religion .People not only abstain themselves from drinking and eating but also from the natural desires.Allah says in The Holy Quran :"O you who believe! fasting is prescribed for you, as it was prescribed for those before you, so that you may guard (against evil). (2:183)
Its more than just not eating and drinking but purifying ones soul and mind.It is a time to cleanse the sins and focus more on prayers and forgiveness from The  Almighty.Ramadan was the month when The Holy Quran was first revealed to Prophet Muhammed (pbuh)Therefore much importance is given in the recitation and learning of Quran. 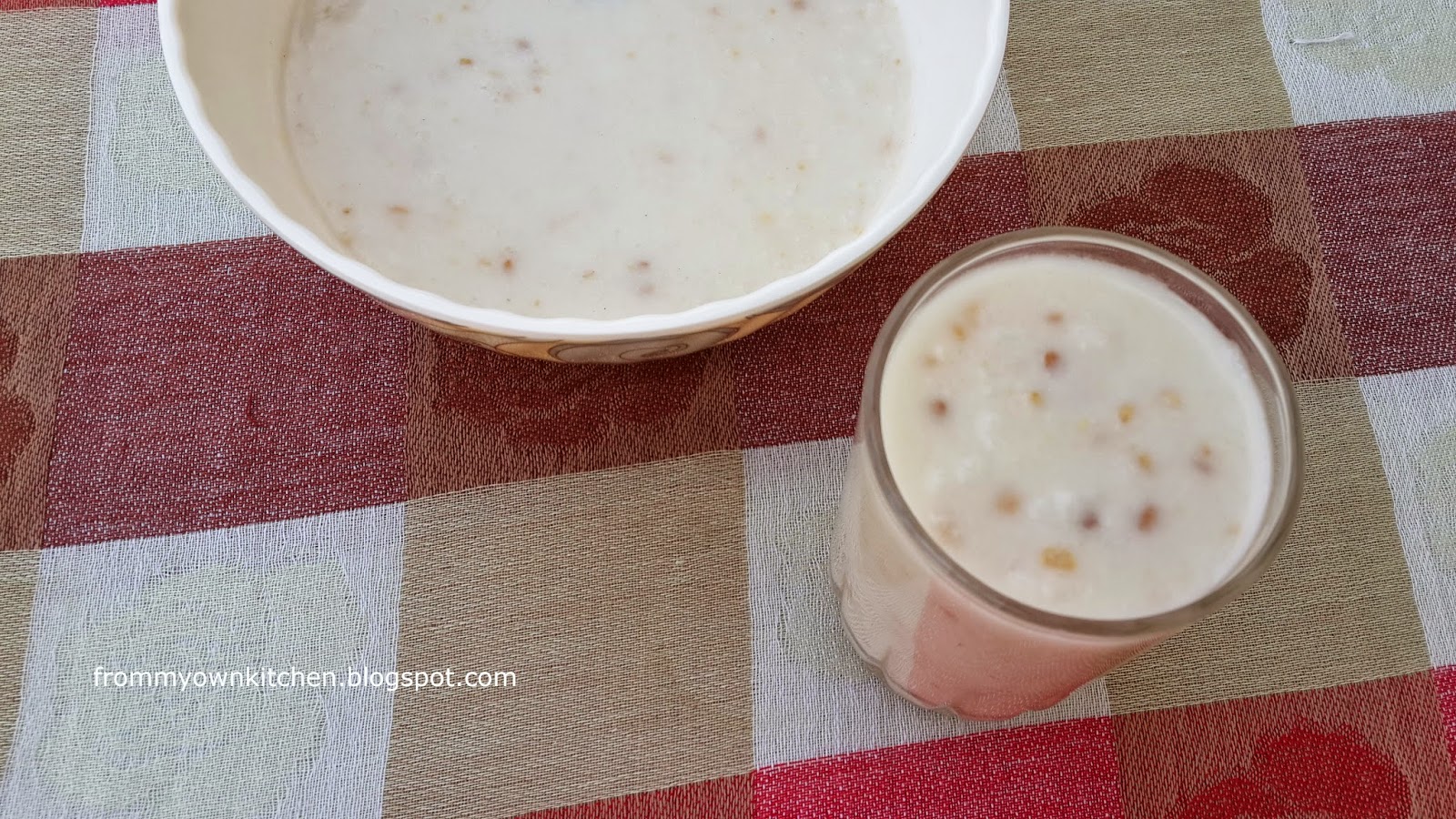 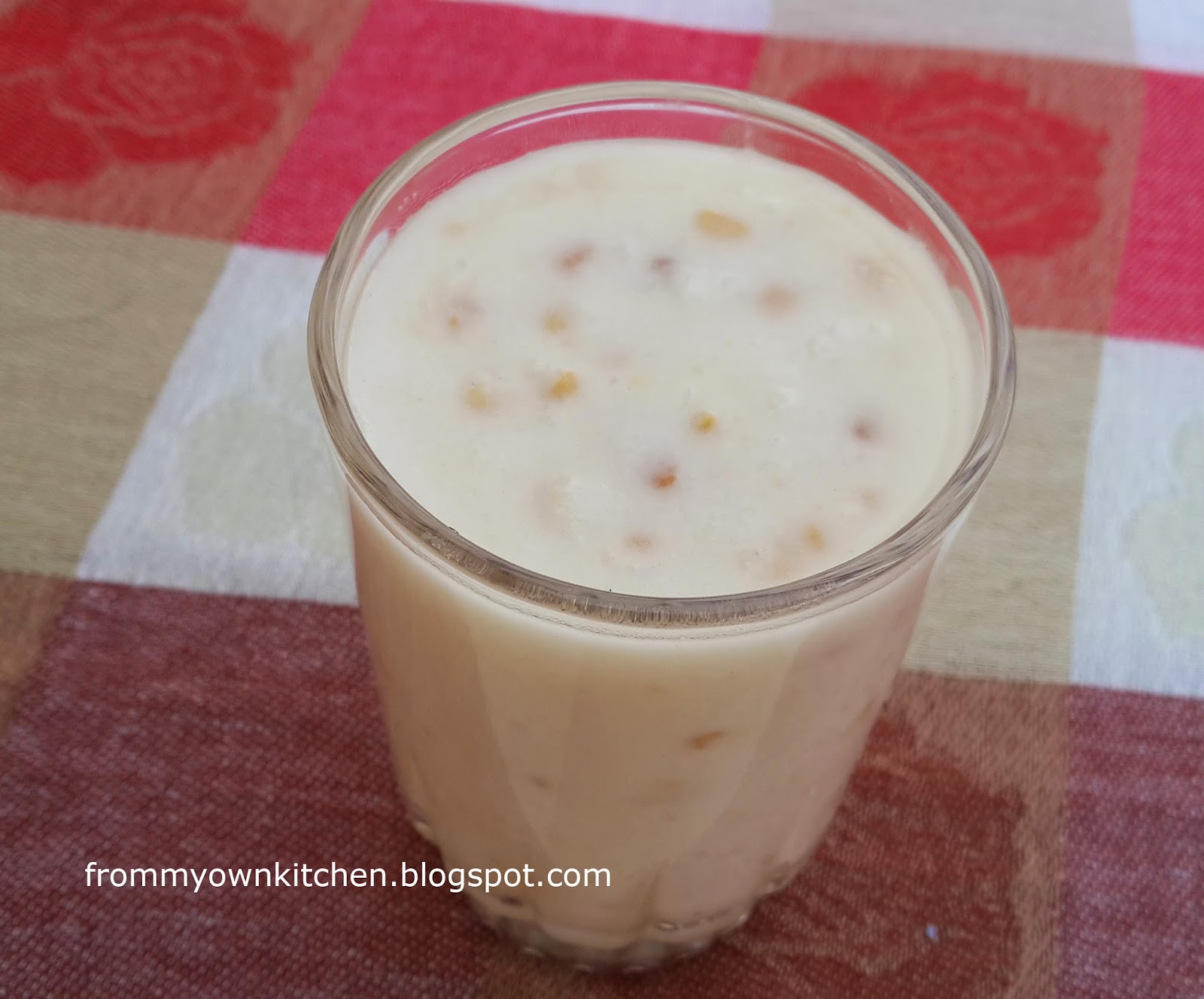 Now for today's recipe.Its the Nombu Kanji.Nombu(as said in malayalam for taking fast) and Kanji means gruel or porridge.This is a very popular semi thick drink served in most parts of Kerala during ramadan at Iftar(meals served after sun set).
There are different versions of Nombu Kanji prepared from place to place.In our place mostly this Kanji is prepared using rice,dal(lentil) and coconut milk.It is an easy to prepare and healthy drink specially for Ramadan.The addition of roasted dal and the coconut milk gives it an awesome taste and flavour.
Not all in the family drinks this(particularly my children and my sisters) but it is a must for the others.My Uppa likes drinking this one glass before going for the Taraweeh prayer(long night prayers performed during Ramadan) 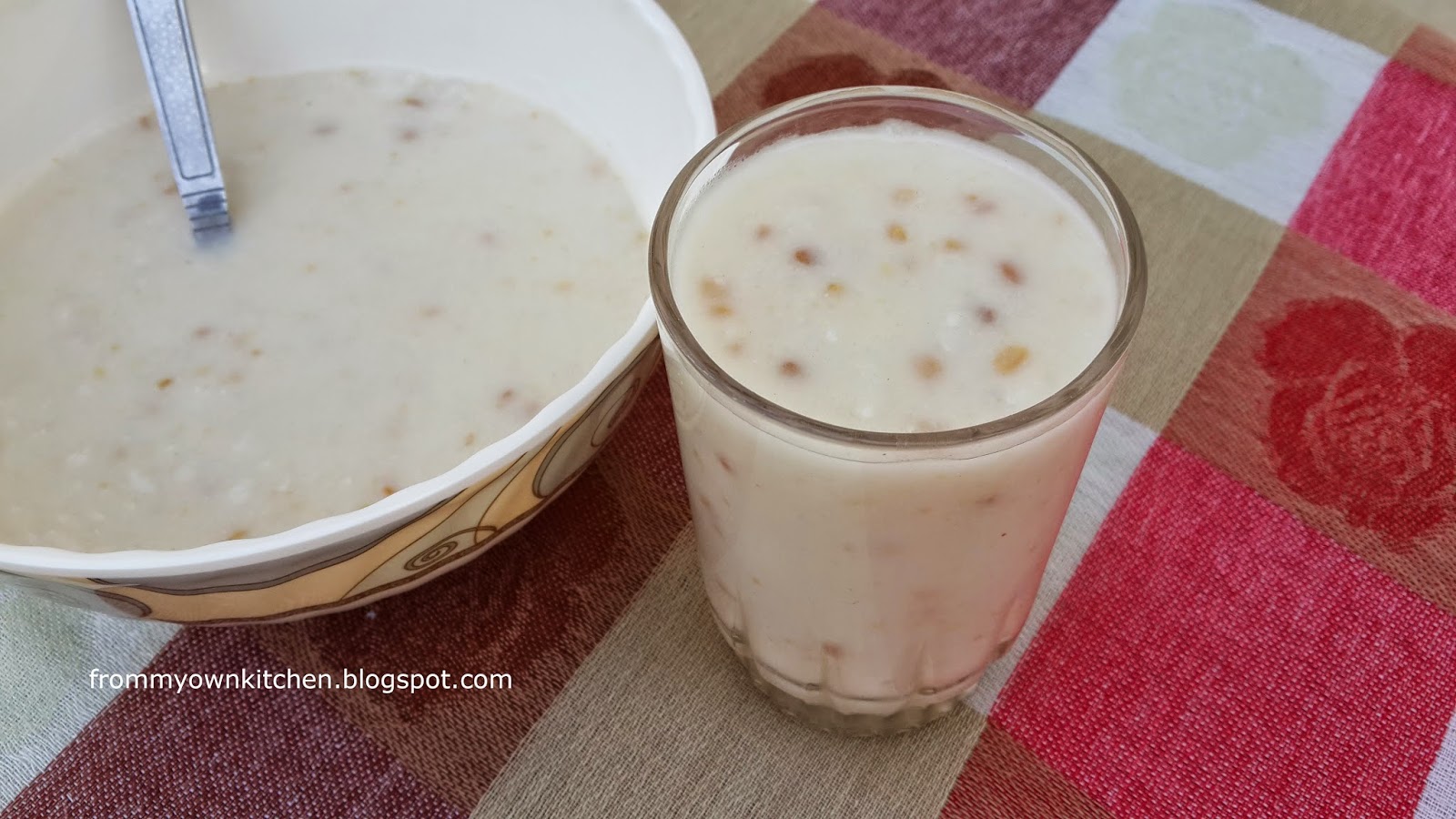 Now onto the recipe
Ingredients
Basmati rice    3/4 cup
Split yellow lentil/Moong dal/
Cherupayar Parippu       1/4 cup
Water                   31/2-4 cups
Thick coconut milk        11/2 cup
2nd and 3rd extract
of the coconut milk         5 cups **
Salt                   as needed
Procedure
-Heat a frying pan,add the dal and dry roast till golden brown.Keep aside to cool.
-In a pressure cooker,add water and keep on medium flame.
-In a bowl add the rice and the dal and wash properly till clear,now strain the water and add this into the pressure cooker.
-Add a little salt (you can check and add later),stir and mix.
-Close the lid of the pressure cooker.Insert the weight and cook till two whistles.
-Let the steam go by its self.Now open the lid and mash the rice and dal a little(till the rice gets mushy)
-Now add the 2nd and 3rd extract of the coconut milk,mix and keep on stove top for boiling.
-Check the salt and add if needed.
-Once it starts boiling add the thick coconut milk (1st extract).Let
it boil for 2-3 minutes.
-Switch off the flame and serve(don't burn your tongue..hehe :) 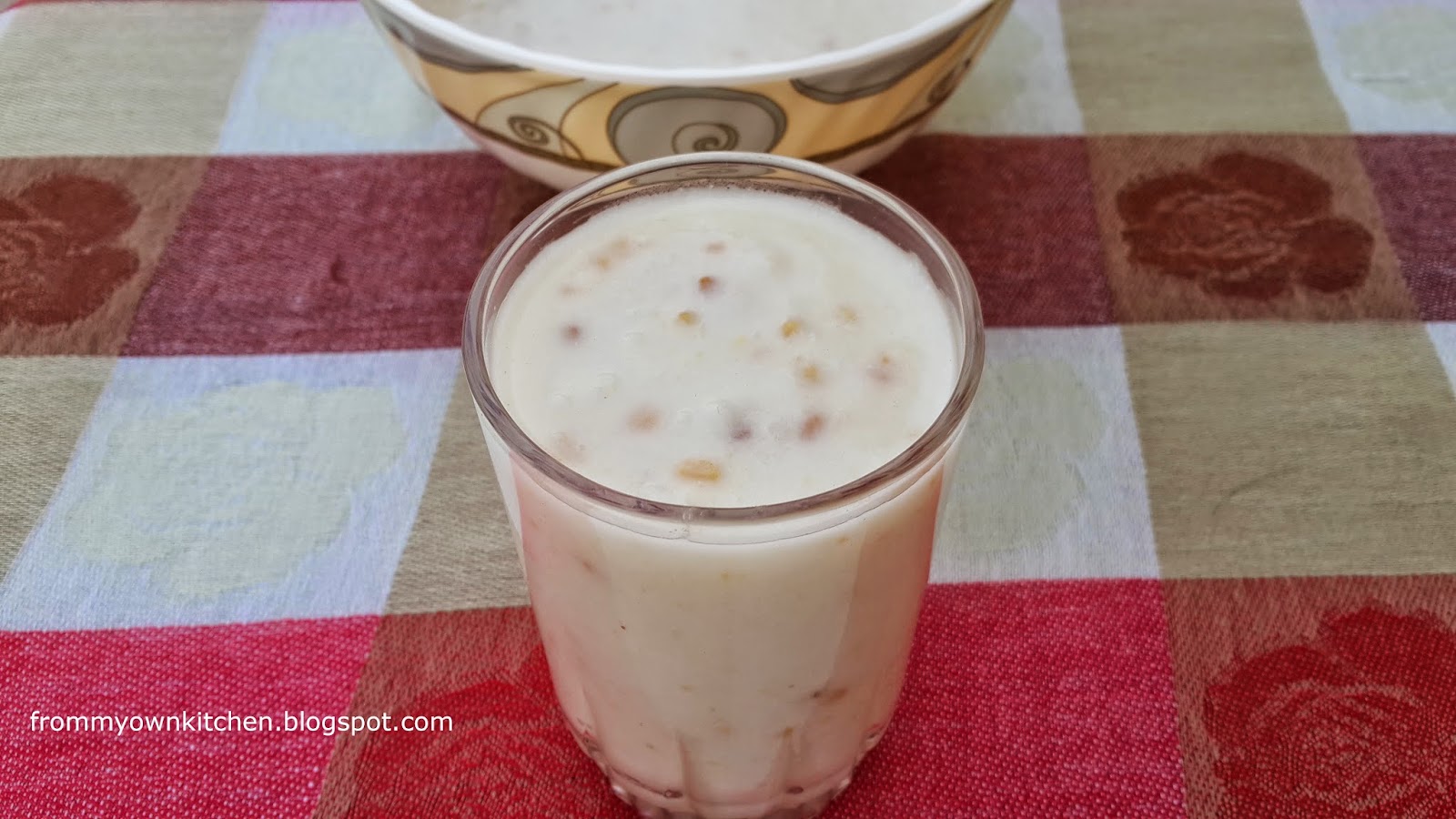 *The 2nd and 3rd extract is added according to the consistency you want,so you can add more or less than the given amount**its better to have it in a drinking(in a glass) consistency.

*At the end if its thick again you can add a little boiled water.

Sending this to
Ahlan Ramadan –The Healthy Way” 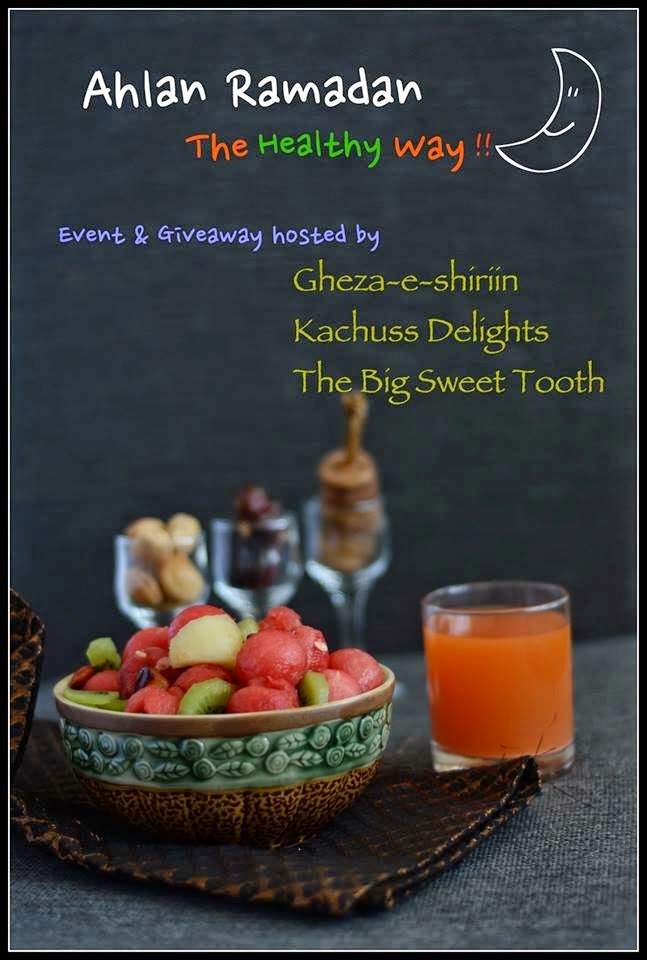